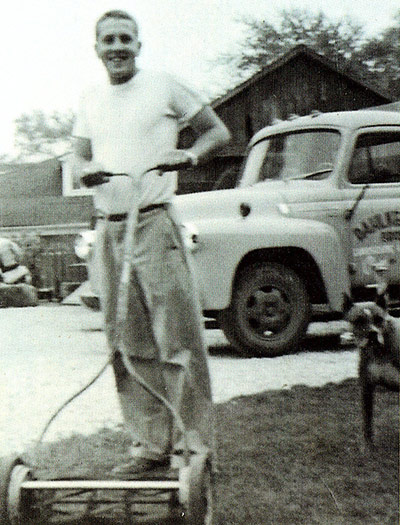 Dahlkemper Landscape began in 1955 as a partnership between brothers Charles L. and James C Dahlkemper, who started the company in a one-car garage at their parents residence. As the business grew, more space was needed, so they moved to a small cottage on Schrimper Rd. The business' gross income in 1960 was $53,000, netting each partner about $150 every week.

Between 1960 and 1970 the business continued to grow and services expanded to include maintenance work, snow plowing, Christmas tree sales, and building patios and retaining walls. While most of the business' work began in Glenwood and Glenwood Hills, Dahlkemper soon branched out to cover all of the finest neighborhoods in Erie and the surrounding areas.

In 1970 a two acre plot was purchased from the Belle Valley Hose Company, and in 1974 a steel building was constructed on a site at 1650 Norcross Rd. There were 24 employees, which included many family members. In 1987, after 32 years of success, Dahlkemper Brothers was dissolved and each brother took their respective divisions to operate under sole partnership. For a few years, the businesses even operated out of the same locations.

Over the coming decades, many changes have been made. The equipment has been modernized, the building expanded, and new talented has been added to the ranks of great employees. The mission, though, has remained the same: to beautify and improve the Erie community. Today the Dahlkemper team employs the most experienced landscape architects, foremen, and construction crew in the region.  The company has been improving Erie's environment since 1955!

Thank you so much for the beautiful backyard. I have been enjoying it so much! My "magical" lights still delight me and no further news from neighbors. The whole effect in the yard far exceeded my expectations. You and Mike did an outstanding job!