The hardscape at the Kearn Residence was a major renovation that started with some simple guidelines: entertainment, relaxation, functionality, connectivity and uniqueness. The problems with their current landscape was that the pool was disconnected from their house and they had to use a small path that was tilted on a slope as their point of access. It was a vast ill-used space and they had enough. 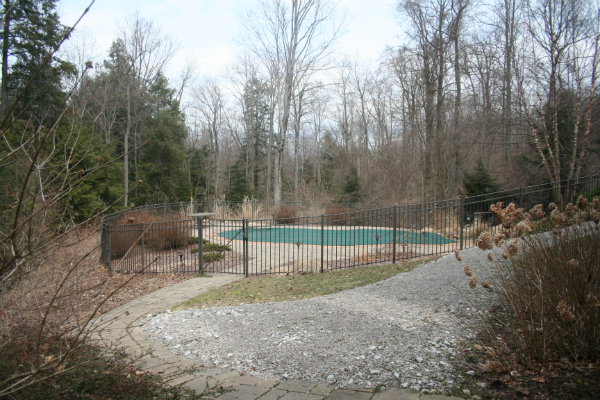 The Kearns love hosting events and parties of all shapes and sizes and they wanted to bring that lifestyle outside and take advantage of their amazing views to the creek. In order to give them exactly what they wanted we first had to lower the entire space to the same height as the pool. After the massive amount of excavation we were able to start building the multiple components of this patio that make this a successful hardscape installation.

We incorporated two different paving patterns within the patio. We designed it this way to show circulation and movement through the space (bringing life into the very open space). There are seat walls to maximize the functionality of the space so if they are having a large event there will still be areas for people to sit and converse. In addition, there are two separate, strategically designed, spaces with customized fire places for each to extend the season. 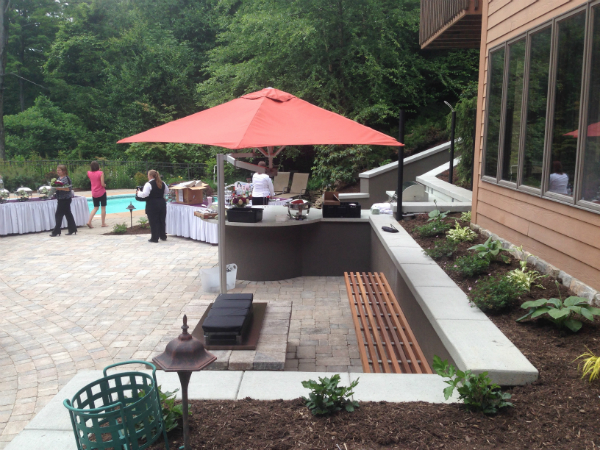 The first is is located near the pool with an overly large fire table surrounded by seat walls. The fire table is a piece of art that makes a statement as soon as you enter from the gravel walk. It is big enough for people to place their drinks or plates down making it not only a source of heat but a useable table. The other fire table is tucked in the corner by the house. It has a one of a kind, original, and customized cantilevered wooden bench as seating which uses the retaining walls as a back rest. The seating is focused on another custom made fire table that is designed to match the stone on their house. The umbrella canopy adds to the experience of intimacy this space creates. 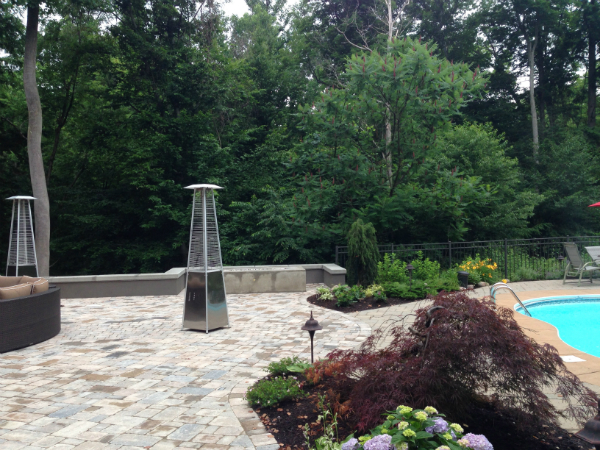 We also gave the Kearns another area of entertainment which is the kitchenette. The kitchenette has a large circular bar at the end for people to gather and converse with one another without being crammed in a small space. The countertop itself has a interesting feature that stands out as dusk creeps into their party. It has glow in the dark particles that illuminate the surface. 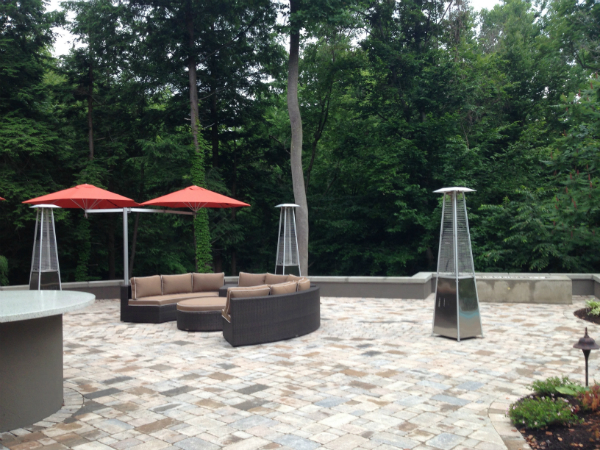 Other elements such as lighting, patio heaters, umbrella canopies, furniture and a stone pathway are all extras that help make this space a successful entertainment area where the Kearns can host events into the wee hours of the night.

Just a quick note to let you know how pleased we were with the job that both Tony & Gene did on our landscaping at our house. They were always there when we needed a question answered or a problem solved. We appreciated their attitude and would highly recommend your organization to anyone.

Thank You
The Kleins - Pat & Rick